Based on the historic Gadsden "DONT TREAD ON ME" Flag, this updated version shows the rattlesnake finally striking, instead of simply rattling. It tells the enemies of liberty that for over 200 years we have watched liberty and freedom being outlawed, ridiculed, restricted, marginalized and destroyed. Tyrants were warned "Don't tread on me" and they refused to listen. Time's up! This is the new flag of the resistance. 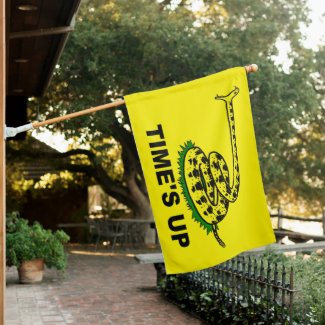 Time's Up flag
by KentForLiberty

Go here to learn more about the philosophy behind the flag.I notice the design is gaining popularity. That is great. As long as you are moving in the direction of "more liberty" we are heading the same way.However, this flag is not a symbol for any political faction. It gives no quarter to authoritarians of any stripe. If you seek to control the voluntary, consensual interactions of any individuals, this message, "Time's Up", is aimed at you. If you support the War on Politically Incorrect Drugs, welfare, national borders, nationalized "health care", "gun control", taxation, racism, or any other statist cause, "Time's Up".

Above is the original version that was made into the flags below.

History of the design: I came up with this design during the summer of 2006 while I was near Albuquerque, New Mexico. I was looking at my Gadsden flag (which was flying nearby) and thought "That snake has been rattling for over 200 years. It is time he finally struck at those who keep treading on him." I pulled a scrap of paper from my pocket and did the first sketch. I toyed with different captions (such as simply "Liberty") before settling on "Time's Up". The final original design is a direct scan of my second sketch, which was almost as good as the first.In early October 2013 I decided the design was due for an update. The snake on the original had always reminded me too much of a boa, and I thought more detail in the snake and grass would be good. The words "Time's Up" also needed to be more prominent. The design was updated again in January of 2021.